I don't really have any hobbies. What started out as my hobby 40 years ago is now my passion and life's work

But I do enjoy most other aspects of theatre and show business. I am one of the founders of Original Kids Theatre. I was on the committee as a consultant for the Wolf Performance Hall and was a designer for the Spriet Family Theatre in the Covent Garden Market.

A couple of weeks ago I had the opportunity to work with two longtime friends, Timothy Drake and Mike Fisher (aka The Amazing Corbin) on a huge project in a brand new hotel in downtown Toronto.

Mr. Drake owns a company that builds and sets-up trade show holograms for various international clients. These displays are similar to the famous Tupac hologram but are fully customizable to the clients needs. But they are sometimes a p.i.t.a. to set up.

We arrived (5 crew, including myself, Mike and Tim) at the Shangri La Hotel in Toronto. We arrived on the heels of the Toronto International Film Festival had vacated the very same hotl and you would never have known it. That's how efficient they were. 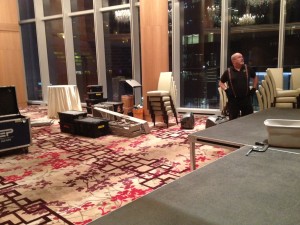 Load in was begun at 4:00pm. Everything including the stage, drapes, and the 15x10x7 foot hologram had to be loaded in and up the 'too small' elevator, down a long hall and into the tiny banquet room. I'll spare you the fine details but Mike, myself and one other crew member crashed at another hotel at 4:30am (leaving Tim and our truck driver to continue setting up).

Two and a half hours later we were up and back at the Shangri La to continue with the fine tuning. If you are doing the math, it's 2½ hours of sleep. I should also mention that we hadn't eaten a real meal since we arrived in Toronto and had to skip breakfast in order to be ready for the 12:00 presentation. 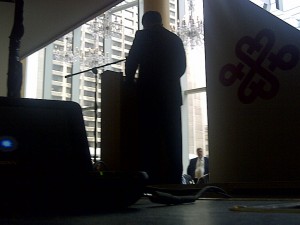 Dressed in our best as this presentation was for a prominent Fortune 500 company I waited for the cue to play the hologram video. Unfortunately the M.C. gave the cue at the wrong time and none of the 100 or so prominent audience members (CEOs, Government officials, Foreign Dignitaries) actually stayed to watch the video. They moved on to the buffet!

Following the shut down at 1:30, we preceded through a 3 hour teardown and load-out and then on to a well deserved meal - finally!

So, altogether it was a 26 hour gig on very little food and minimal sleep - all so that no one would watch the 3 minute video presentation that the client paid well over $10,000 to produce!

Oh and now we've had offers to do it again in Paris, Madrid, Dubai, Vegas and Trinidad.

Can I sleep on the plane?