Thursday 11am: It began with a phone call. I was in my workshop fixing a road case when magician Timothy Drake called. “Have you got a passport?”, he asked. “No, but I can get one”, I replied. I was going on my first cruise in about eight months and I’d need one anyway.

“What’s the deal”, I asked, thinking that I’d be going with him to set-up or assist on one of his Trade Show Holograms.

Ohhhhh-kaaaaaay. So I changed and decided to go and get the photo. First though I logged onto the web, filled out and downloaded the application. Papers in hand, photo taken, I set out to find my guarantor.

Thursday 3pm: I had my passport in hand and I’m on the phone to my wife.

“Tomorrow night. I leave in three hours. Love you, Bye.”

As it turned out, it wasn’t just me. There were two other performers going as well. London juggler Steve Seguin and a local face painter. We were told the event was a kid’s birthday party on a boat. That’s it. I had two hours to prepare a 40 minute show for kids whose age, gender and nationality I didn’t know and pack it into a carry-on size case that would double as my on-stage case. The agent who booked us, in spite of calling me every half hour worried that we were not going to make it, is notorious for not having a lot of details about clients or shows.

Thursday 7pm: On the road (me, Steve and the facepainter) to the Detroit Airport hotel. Arrive. Dinner. Sleep.

Friday 7am: Depart Detroit Airport for St. Maarten. Lunch is available on the plane for $5 US but all I have is $5 CAN. He takes it. (this comes into play later) 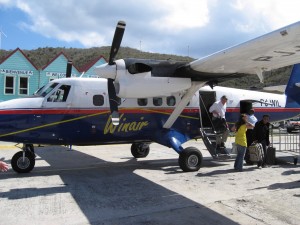 Friday 2pm: We land and are met by a concierge who gets our luggage AND fast tracks us through customs. Yay! He then escorts us to a much smaller plane for the short jump to St. Barthelemy, French West Indies.

Friday 3:30pm: We land and are met by our client, Helen of Essential Yacht Services. She packs us into a cab and off we go to the hotel – on the beach! However there isn’t any time to assimilate ourselves to the surroundings because we have to be onstage by 6:00. Back in the cab for a short ride to the pier.

Once at the pier we unload onto the dock and wait for the tender (one of two) to take us to the boat, um, ship, The Excellence III. As it turns out, the ship is too big to fit in the St. Bart’s harbour.

Friday 5pm: We board. Greeted by five crew members, all in white, asking us if THEY can assist US n any way. Sure. It’s just this case here, but thanks. Oh, and I have to take my shoes off. Don’t want to take a chance on scratching the solid teak decking on all three levels of the yacht.

We are escorted upstairs to the top deck and shown the party area. It’s a nice sitting area with lots of room and we are to perform in front of the bbq buffet they have laid out. After we’re all set-up, Steve and I decide that he should go first, do his 30 minutes and then it’s my turn. The face painting will take place before the show.

But where are the kids? 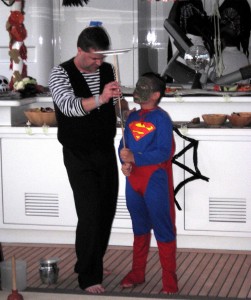 Friday 5:50pm: The kids arrive. Four of them. The 9 and 8 year old son and daughter of the Russian dad who rented the yacht and two 7 year old Swiss twin sisters whose family were his guests. That’s it. Four kids. None of whom spoke English as their first language. Also, as it turned out, the 9 year old was a bit precocious and his sister just wanted to watch (not volunteer). The twins were fun but they needed a translator. No parents. They were below deck having a spa day and another, fully prepared meal. The buffet, entertainment and event on deck was only for those four kids! Although we had about 6-8 staff watching the show, they were the ‘babysitters’. Also, it wasn’t a birthday afterall. It was a Halloween party (in May). 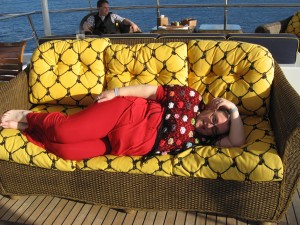 The kids enjoyed the show but the face painter got seasick and couldn’t do her best work.

Friday 8pm: After the show and some food we were back in the tenders enroute to our hotel. We decided to walk down the beach and have a larger meal by the water and about midnight we called it a day. 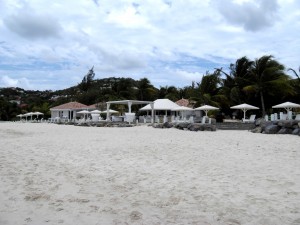 Saturday 10am: Breakfast on the hotel terrace and then we basically ‘killed time’ waiting for the return flight at 2:30pm.

Saturday 2:30pm: We say goodbye to St. Bart’s and settle in for the long trek home although this time around, I was smart (so I thought). I made sure I had $5 US for the lunch on the plane. However when the flight attendant got down to me – she had run out! Run out! And to add insult to starvation, the connection in Philadelphia was so rushed that I didn’t have time to get anything. Lunch (dinner) didn’t happen until midnight, at Tim Horton’s, after we crossed the border into Canada. Nine and a half hours on pop and cheap airline cookies! 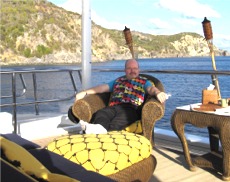 But it was a lot of fun. We figured out that the client – the dad (whom none of us met, BTW), spent in excess of $10,000 to fly us down and do the show, over and above the half a million he spent renting the yacht for the week.

Lessons learned: Yes, I am ready for any show, anywhere, anytime for any audience.

(But make sure to pack a lunch first!)